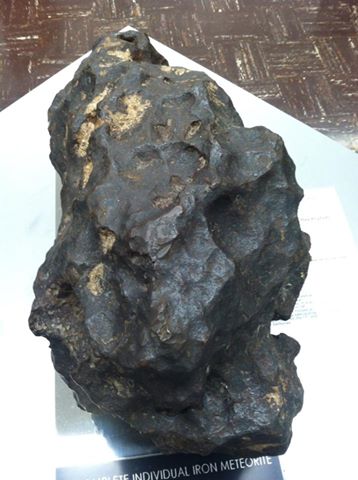 This 162 kg (357 pound) meteorite in the center of the room is called Canyon Diablo. It is a IAB iron meteorite formed by impact melting near the surface of a chondritic asteroid. This process is also discussed in connection with the Campo del Cielo poster near the center of the north wall.

This fragment was derived from a 300,000-ton projectile that formed Meteor Crater about 50,000 years ago. The impact generated about 150 times more explosive energy than the atomic bomb dropped on Hiroshima.

The meteorite was given to UCLA in 1934 along with the Clark Library. The library is an attractive building in 19th-Century style, located in Los Angeles at 2520 Cimarron St., near Arlington and Adams. It specializes in materials from the 17th and 18th Centuries. Clark, the founder of the LA Philharmonic, was the son of the copper baron (and U.S. senator from Montana) William A. Clark (1839-1925).