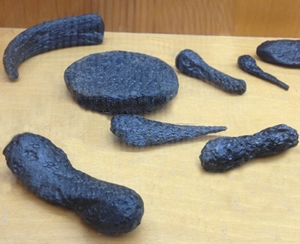 Tektites from the UCLA collection

Tektites are terrestrial sediments that have been melted by large impact events and cooled quickly to form silica-rich glass. Splash-form tektites come in several basic shapes, mainly disks, dumbbells and teardrops. Tektites with these shapes formed as partly-molten/partly-plastic objects spinning freely in the atmosphere after melting and launch from the Earth’s surface in the wake of a large cratering event. Layered tektites, also known as Muong-Nong tektites, formed as puddles of silicate melt at the Earth’s surface.

Examples of Libyan Desert Glass (LDG) are exhibited in the bottom half of the case. These chunks of layered glass are nearly pure silica (like quartz sand) and formed from such sand by a large cratering event. Many of the specimens are banded; the differences in band color may be related to differences in the amount of bubbles trapped within the glass.