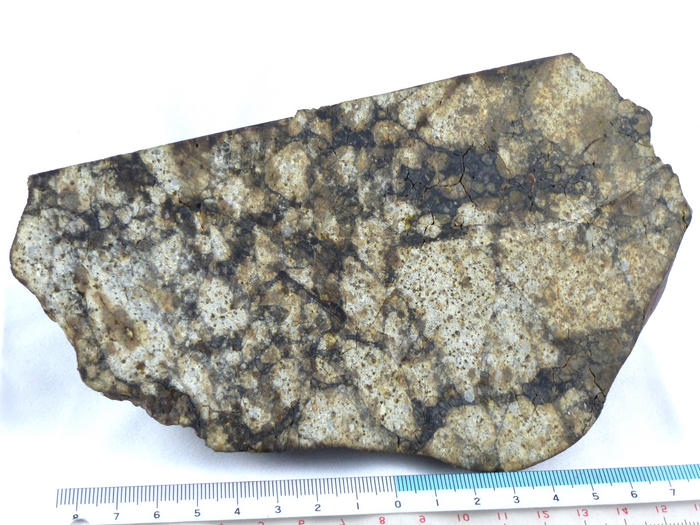 Small meteoroids do not strike the Earth’s surface at cosmic velocity because they are slowed down by the atmosphere. In contrast, smaller bodies like the Moon and asteroids have no atmospheric filter, so even small meteoroids impact their surfaces at very high velocities (typically several kilometers per second). The resultant impacts can produce dramatic changes in the target rock. Impact processes affecting the targets include impact melting, impact vaporization, and brecciation.

Also shown is a photograph of the LL impact-melt breccia LAR 06299. This rock contains many vesicles (holes derived from gas bubbles), formed by vaporization of volatile constituents during impact heating.

The bottom shelf holds samples of an H-chondrite regolith breccia called Plainview (1917). This meteorite formed at the surface of its parent asteroid and contains solar-wind-implanted noble gases, impact-melt-rock clasts, and fragments of carbonaceous chondrites. The latter samples were derived from foreign meteorite projectiles that collided with the Plainview parent asteroid at sufficiently low velocities to remain intact.