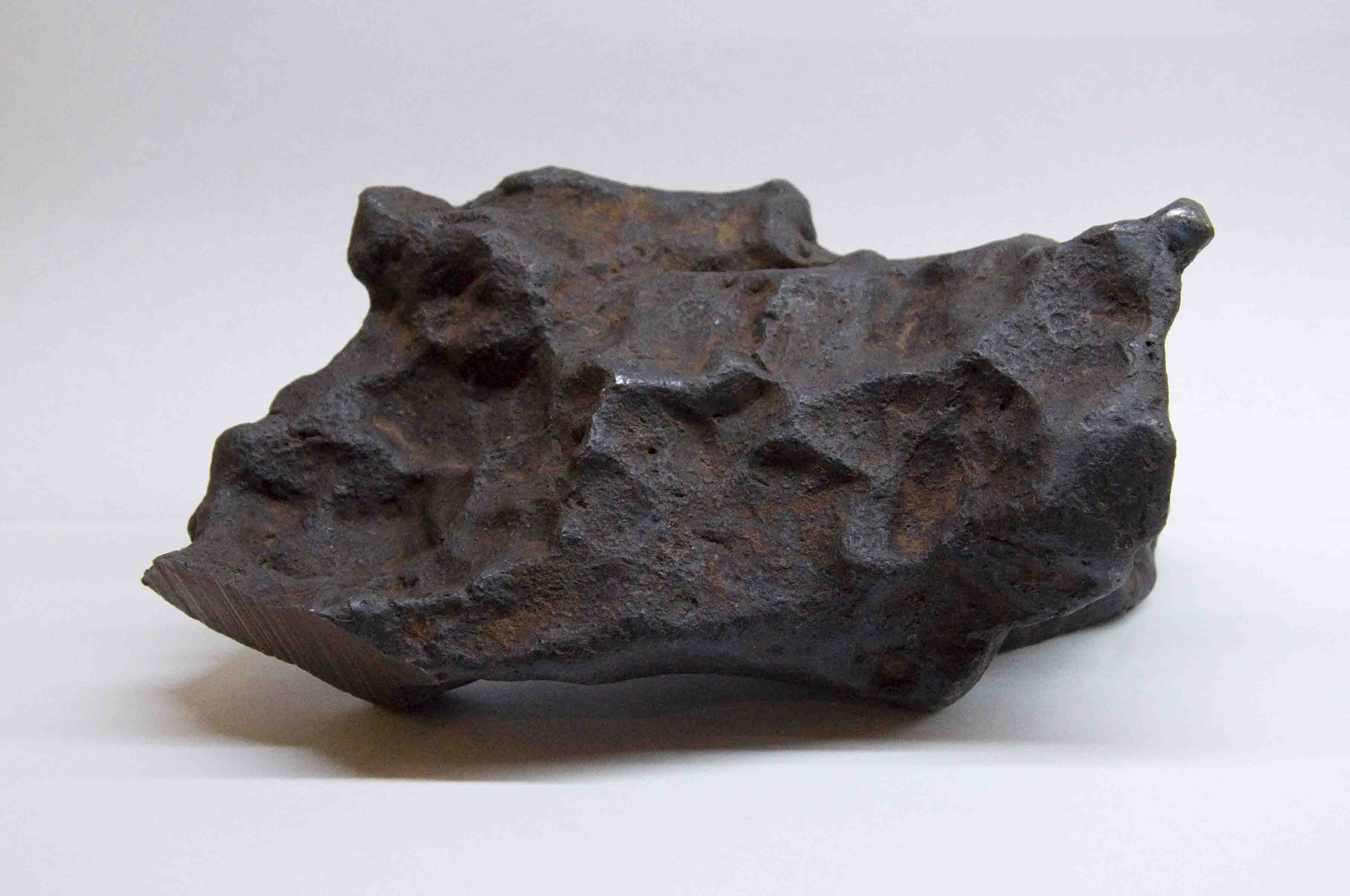 When an asteroid melts, two immiscible liquids form – a dense metallic liquid that sinks to the center of the body and a silicate-rich liquid that floats above it. The metallic melt eventually crystallizes to form an asteroidal core much like the iron core of the Earth. The silicate melt crystallizes to form the mantle and crust of the asteroid. An asteroid with this structure is called “differentiated.” Rocks derived from these asteroids are the “differentiated meteorites.”

The top shelf of this case shows some examples of iron meteorites that came from the cores of differentiated asteroids. The irons are divided into different chemical groups designated with a Roman numeral and one or two capital letters, e.g., IAB, IID, IIIAB, IVA, etc. Each group is derived from a separate asteroid. The samples on the top shelf include Kinsella (IIIAB) [found in Alberta, Canada in 1946], Nazareth (iron) (IIIAB) [found in Castro County, Texas in 1968], Mount Dooling (IC) [found in Australia in 1909; this particular piece is shrapnel, formed by mechanical deformation of large iron masses during crater-forming impacts on the Earth’s surface], Turtle River (IIIAB) [found in Minnesota in 1953] and Carbo (IID) [found in Sonora, Mexico in 1923].

Different kinds of differentiated meteorites are exhibited in the bottom half of the case. The Campo del Cielo IAB iron meteorite [found in Argentina in 1576] may have formed as part of an impact crater on the surface of a chondritic body after metal separated from silicate and pooled at the crater floor. Muonionalusta is a IVA iron meteorite [found in Sweden in 1906] that formed in the core of a melted and differentiated asteroid. Canyon Diablo is a IAB iron, part of the massive projectile that formed Meteor Crater about 50,000 years ago; this particular piece is a chunk of shrapnel, formed during the explosion that created the crater. (A 162-kg piece of Canyon Diablo is located in the center of the room.) NWA 468 is an ungrouped silicated iron meteorite found in Northwest Africa in 2000. NWA 5549 is a IAB iron found in Northwest Africa in 2008. NWA 854 is a IAB iron found in Northwest Africa in 2000. Pallasites are meteorites made of half metal and half olivine; the metal is from the top of the core of a differentiated asteroid and the olivine is from the bottom of the mantle. The two pallasites here are Springwater [found in Canada in 1931] and Seymchan [found in Russia in 1967]. Differentiated stony meteorites include the Millbillillie eucrite [fell in Western Australia in October 1960]; this rock is a basalt that formed as a lava flow at or near the surface of its parent asteroid. Nearby are NWA 6694, a polymict eucrite found in Morocco in 2011, and NWA 6693, an ungrouped achondrite found in Morocco in 2010. Two other differentiated stony meteorites on display are Johnstown, a diogenite that fell in Colorado in 1924, and Cumberland Falls (an aubrite, also known as an enstatite achondrite), that fell in Kentucky in 1919.